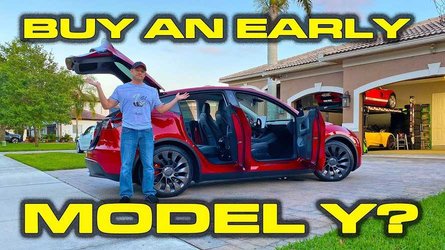 Does the Tesla Model Y suffer from the same paint issues, panel gaps and shoddy build quality that the Model 3 did when newly produced? Let’s find out.

Brooks over at DragTimes goes out on a limb to explore the build quality of the Model Y. We say out on a limb because Brooks typically races cars or puts them on a track. This build quality video really isn’t something we’re accustomed to seeing from DragTimes, so it’s a bit of unchartered water, so to say.

It’s no secret that Teslas have often been found to have some paint problems. Part of that is linked to where the automaker paints most of its cars – California. Certain regulations there definitely make it tough to use paints that are durable and widely used elsewhere. Tesla is basically forced to make due with paint that adheres to strict environmental guidelines (as all automakers should be forced to follow, regardless of which state in which the cars are painted), while at the same time expectations are that the finish will be as good as products that don’t meet these guidelines.

Let’s move on though. This DragTimes video takes us around (after 2 minutes of washing the car – skip past that if you’d like) a new Model Y to see if paint issues exist. It continues on with a look at the build quality and fit and finish of a very early Model Y. The conclusion is that yes, a newly produced Model Y comes with issues similar to an early production Model 3. There are bad panel gaps, but they are mostly limited to door alignment. And there are some paint issues too.

Take a look at the video and let us know what you think of the build quality of a newly produced Tesla Model Y.

It’s day 2 with my Tesla Model Y Performance and in this video I go over the fit and finish of this brand new car from Tesla.

Karma Automotive announced today the starting price of its upcoming first all-electric model, the GSe-6, which…

Lucid Motors has revealed more details about its upcoming Lucid Air model range. The base…

Tesla (TSLA) has reduced the price of its flagship sedan, the Model S, today. The…

The fastest electric car to ever lap the famous 20.81 km (12.93-mile) Nurburgring Nordschleife is…